Thank you for your consideration in contributing any amount to Dan's memorial scholarship. He was a stalwart promoter of HTHS and its alumni, spending the last 13 years of his life to honor them. Let's return the favor...

A PayPal account is not required, most credit cards will suffice.

Thank you to the 2020 Santora Scholarship Donors:

Dan Santora graduated from HTHS in 1973. He passed away due to complications of throat and brain cancer in February 2019. He was 63-years-old and a lifelong resident of Haddon Township.

Dan graduated from Glassboro College (now Rowan University) in 1977. He operated a successful painting contractor business until his first major battle with cancer in 2000. He was 45-years-old at the time. In 2006, he founded the Haddon Township High School Alumni Association and presided over the organization until his death except for a brief hiatus. 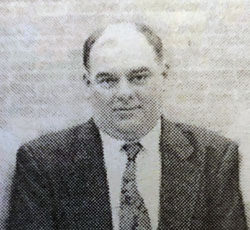 The Alumni Association’s chief goal was to establish scholarships for HTHS students. That goal was realized with several scholarships and many gifts given to the school via funds raised mainly by selling alumni T-shirts, sweatshirts, and raffle tickets at sporting events and community functions like the Township Block Party and Luau at Crystal Lake. There were also Beef and Beer and 50/50 proceeds. Whenever HTHS asked for anything from the Alumni Association, Dan worked with his committee and made it happen.

Mr. Santora taught classes on Microsoft EXCEL at HTHS’ Adult School for many years. Quite an achievement as surgeries had removed much of the tissue and muscles on one side of his neck. Most of the time he required the use of a hand to hold his head upright. Dan published a book on EXCEL for Business with Amazon Press in 2009. He also worked on many Class of ’73 reunions and our recent Backyard BBQs (non-reunions).

He was a man of many talents and interests. He dabbled in art: drawing and painting; music: playing guitar and appreciating many genres; computers: building, repairing and programming; photography, and woodworking.

He was a very active member of Grace Episcopal Church in Haddonfield. In his eulogy, Dan was described as a “Godsend” who shouldered daunting maintenance tasks in a church that was built in 1842. He often worked alone, parsing jobs into manageable blocks of labor and staying the course until they were completed.

Daniel Santora’s school spirit bloomed many years after his graduation. He overcame hardships many would have withdrawn from. One thing is certain, Dan's heart was always with HTHS and its alumni.